You have permission to edit this article.
Edit
Home
News
Sports
Obituaries
Multimedia
e-Edition
Classifieds
1 of 3 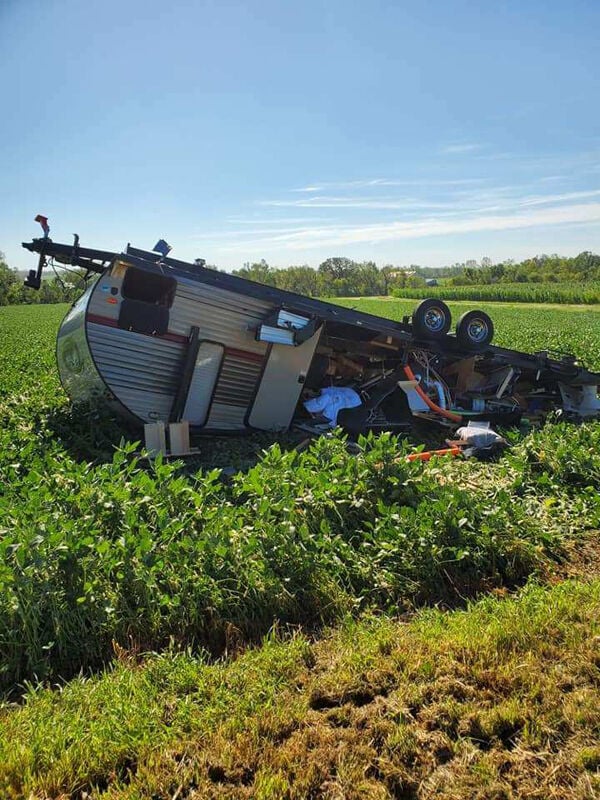 This RV camper owned by Ryan and Kelli (Cobb) McClintock was thrown approximately 100-150 feet from the building it was housed in and left upside down and destroyed during the August 10 derecho. 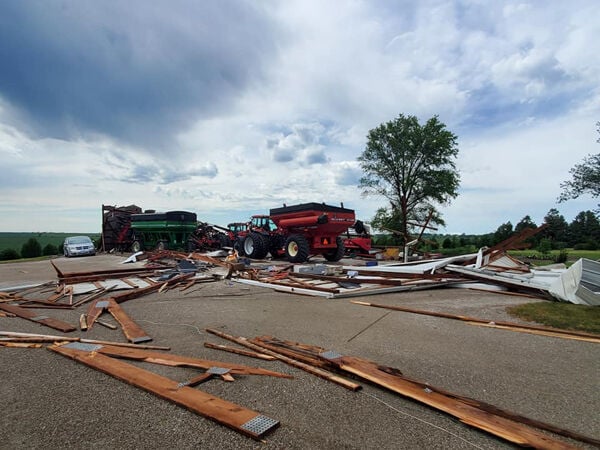 There were no walls left standing from a machine shed at the residence of Ryan and Kelli McClintock following the derecho on August 10. 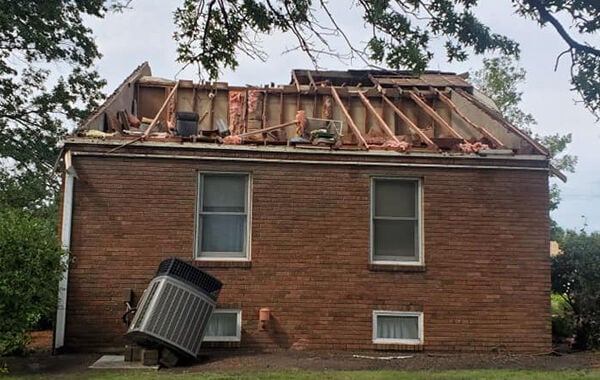 The photo above shows what remains of the home of Paul and Rhonda McClintock, father and mother-in-law of Kelli (Cobb) McClintock. The family home suffered significant damage in the August 10 storm.

This RV camper owned by Ryan and Kelli (Cobb) McClintock was thrown approximately 100-150 feet from the building it was housed in and left upside down and destroyed during the August 10 derecho.

There were no walls left standing from a machine shed at the residence of Ryan and Kelli McClintock following the derecho on August 10.

The photo above shows what remains of the home of Paul and Rhonda McClintock, father and mother-in-law of Kelli (Cobb) McClintock. The family home suffered significant damage in the August 10 storm.

As many Iowans have endured significant pain and unpleasantries in the Year of 2020 due to COVID and the complications it brought forth, it has become a monthly question of what could possibly happen next. No one was prepared for what Mother Nature had in store for the Midwest.

Each year Iowans deal with weather related destruction from tornadoes, flooding, droughts, severe thunderstorms that usher in large hail and more. Most had never heard of a derecho prior to August 10 and those that found themselves in the unfortunate line of fire pray they never experience one again.

The Ryan and Kelli (Cobb) McClintock family in Shellsburg, just northwest of Cedar Rapids have now found themselves picking up the pieces for a second time following a derecho in the same decade.

“This is our second derecho wind storm we have experienced,” said Kelli. “Back in 2011 it wasn’t as big or as wide and didn’t last as long. The one in 2011 we had more house damage because of trees being closer and laying into three sides of our home, one just missing taking out our kitchen. We had to have new siding, windows and roof in 2011.”

The derecho that wrecked havoc just two weeks ago has been estimated to be over 700 miles long and reaching up to 90 miles wide with wind speed estimates now of up to 140 miles per hour. Derechos are not as well known as hurricanes in southern states or tornadoes that plague the Midwest and south, but these rare storms can be just as powerful and destructive.

The McClintocks home sustained less damage this go around, however nearly every out building including a machine shed that housed nearly all farm equipment, barns and grain bins sustained significant damage, if not completely destroyed.

“The damage is pretty significant up here and the crop damage is astronomical,” Kelli continued. “This fall will be one of the longest falls we’ve ever had to get through our corn crop. That’s where our other big issue with damage is.”

Kelli’s family also own and manage two hog confinements that were of concern following the storm.

“They did get a little bit of damage but we were very blessed and lucky there as we have eight barns within a 45-minute drive from here that were completely destroyed,” said Kelli. “That’s a lot of people’s livelihoods up here. That was our biggest fear when we finally got off our own property and after we left my in-laws was wondering if we were going to have 7,000 little baby pigs running around since we had just restocked our barn a month before. We were real lucky there.”

Kelli and her husband are self-employed as they farm 1,000 acres of row crops as well as running the hog confinement. Kelli is also employed as a certified occupational therapist assistant for Mercy Home Care and travels for her part-time position to other areas including Cedar Rapids.

“In the Cedar Rapids area it’s rough in the larger areas as they are trying to figure out how to get trees down and out and people that are pretty much homeless living in the front yards as they are afraid of possible looting and they are struggling,” Kelli added. “Being in the country it is a mess, but in some ways we still feel very blessed that we had no more damage than we did. Which is crazy to say when you know what you have just experienced but you have to find the other side of it.”

Julia Chatterley: This is what uncertainty overload looks like

Kelli was fortunately off work on the now unforgettable Monday storm, but was keeping track of the pending storm through weather updates.

When the sirens went off that morning, nothing was happening outside that was of concern to Kelli immediately. She made lunch and remained upstairs in the home for another 20 to 25 minutes even as sirens continued.

“Normally we are storm watchers and we don’t tend to go down to the basement,” she laughed. “For whatever reason it was that possessed us, we did actually go downstairs and it was the longest 25 minutes of wind and straight rain. That’s how we knew it wasn’t a tornado because they don’t stay on the ground that long and sit right over you.”

Once the storm passed Kelli’s husband knew an army would arrive to help if she phoned her parents. Jerry and Kim Cobb of Allerton quickly rushed to make their way to help with cleanup. Along with her parents, her brother Josh Cobb along with friends Dustin Onstot, Chris Gilson and Jared Chambers loaded up equipment to make the trek to help assist any way they could as well.

The August 10 derecho has been compared to that of a hurricane levels two and three with one big difference in comparison. Those living on coastlines generally have days and sometimes weeks to brace themselves for the potential hurricane to hit land. Those living in the path of this storm were given much less time to prepare with only mere minutes to hours given on this day.

“With them losing their home we are trying to get them settled as well and trying to find them a place to live,” said Kelli. “They lost their garage which has family history to it as well. When my husband’s grandparents were first married they lived there and their home burnt right after their wedding with all their wedding gifts. So they ended up living in this little garage that now has totally disappeared. This was at least 70 years ago of history and now it’s gone.”

It is estimated nearly 14 million acres of crops were destroyed in the storm path.

“We were in a state of shock initially, but then you realize you just have to keep moving forward,” she said in closing. “My father-in-law grew up on these farms and they have been in the family a long time. There is a lot of emotional ties with this and it will be a big change, but we will continue to push forward.”

Kelli attended Wayne Community School until 1998 before the Cobb family moved to West Des Moines and she graduated from Waukee in 2000. She and her husband are the parents to three children, Grayce, Cooper and Zoey.