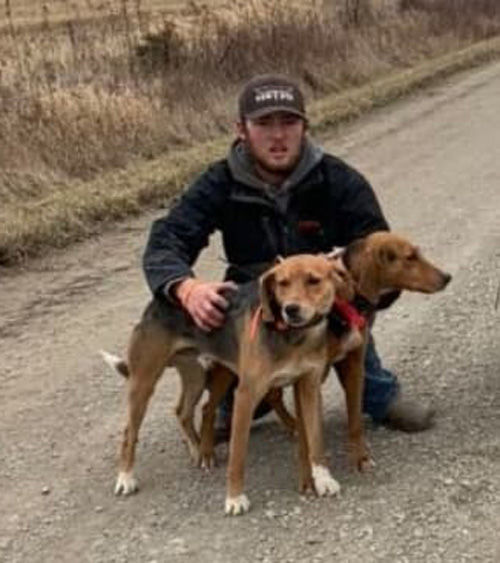 Ty Campbell is pictured with his black and tan coyote hound Buddy pictured to the left before a day of hunting. Campbell was grateful Buddy was saved and will be joining him on several more hunts in the future. 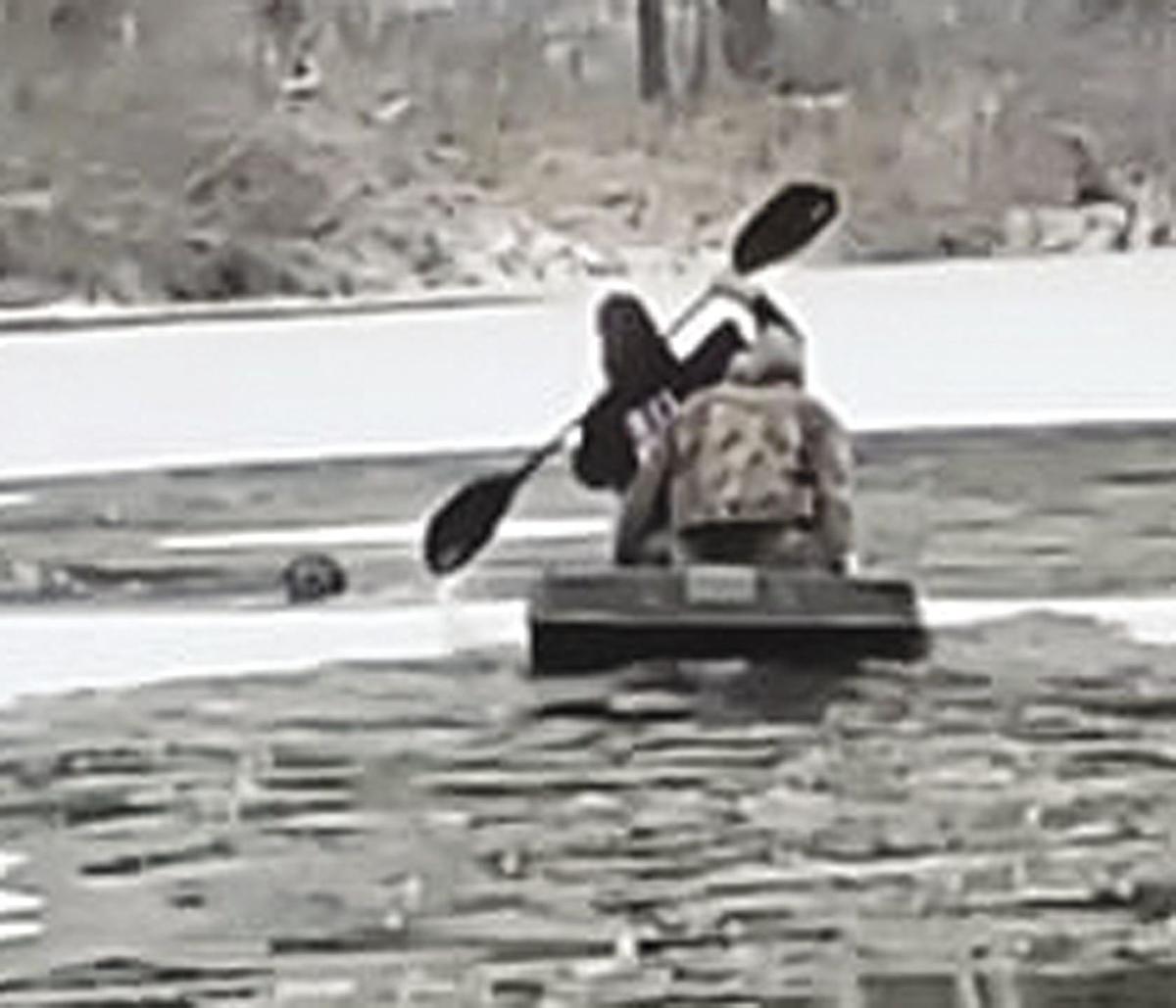 This photo was captured from a video taken during the rescue of Buddy from the Corydon Lake Park on Jan. 13.

Ty Campbell is pictured with his black and tan coyote hound Buddy pictured to the left before a day of hunting. Campbell was grateful Buddy was saved and will be joining him on several more hunts in the future.

This photo was captured from a video taken during the rescue of Buddy from the Corydon Lake Park on Jan. 13.

Far too often in this day and age the news we see flash before us on television screens and making the headlines are the stories of sadness. The headlines that feature grief, despair and agony seem to get more attention than those stories of happy endings. Living in a small town and community we are generally, for the most part fortunate enough to avoid the big city drama and able to celebrate successes and the good things that happen around us.

Living in Iowa we are all aware how cold our winters can be. With the frigid temperatures, freezing ponds, lakes and any other bodies of water is inevitable. The past two weekends our area was hit with low temperatures, lots of falling snow mixed with freezing rain and high winds making the wind chill even cooler.

With weather conditions like these, no one could have predicted the events that unfolded just before noon on Jan. 13. Ty Campbell, Taylor Rhoades and Cody Bertelson enjoy the sport of coyote hunting and were running their hounds on the breezy Monday winter morning.

As Campbell followed his dogs Buddy and Cinch he saw them head into the Corydon Lake Park area and the coyote shot off across the frozen lake. The dogs followed closely behind until the unexpected happened.

The coyote made it across the large body of water unharmed, however the ice gave way causing Cinch to fall through just five feet from the shore. Buddy kept on the coyote chase making it much further onto the ice before he fell through about 200 feet out.

Campbell watched as Cinch was able to pull himself out of the frozen tundra after only five minutes in, however felt helpless seeing his dog Buddy struggling halfway across the lake. He knew there would be no way he could make it out to help his beloved hound and radioed out on the hunting cb channel  what was happening and that help was needed.

Nearby Josh Cobb, Dustin Onstot and Cody Hinson, members of the Corydon Volunteer Fire Department heard the call go out on the radio and rushed over to provide support. With all three having ice rescue training, they would have the chance to put their knowledge to the test.

As of now, Wayne County doesn’t have any ice rescue equipment, including no available boats, making the men begin to reach out in search of resources to help them rescue the struggling dog in the icy water. Several phone calls were made until Kyle Andrews showed up and with the help of Hinson, they took off on a search and returned  with a kayak from town.

“That unfortunately wasn’t working since we couldn’t reach the front to break the ice,” said Cobb.

With other calls made, Jimmy Spidle reached out and was able to locate a flat bottom boat owned by Larry and Lisa Harlan.

Biden has largest lead yet ahead of South Carolina primary

“Once Jimmy showed up the race was on to get to the dog before it was too late,” Cobb added. “He had been staying a float for close to 30 minutes.”

Onstot, Hinson and Cobb were all in the boat working to break through the 200 feet of ice to get to Buddy as Campbell watched with fear hoping they wouldn’t be too late.

“He was able to half way pull himself up and hang on to the edge of the ice, but I knew he only had minutes, maybe only seconds left,” said Campbell.

Finally, the boat was able to reach Buddy and Cobb reached out to grab the hound and pull him into the boat.

“I really think had Josh not grabbed him when he did, he would have went under and not survived,” Campbell added.

Once they returned the boat and wet, shivering dog to shore they quickly loaded him up and headed to Paul Evitt’s shop just a short drive away. Inside the shop they had heaters going to get the dog dried and his body temperature back up.

“By four that same afternoon he was back to himself and ready to go again,” Campbell said. “I can’t thank those guys enough for their help and all they did that day.”

For many of us, our pets are one of our family members. We love them deeply and want to protect them from any harm. Saving a life whether human or a four-legged friend makes for one heck of a good day and deserves to be the front page headlines for the week.

With this story having a happy ending, Wayne County Emergency Management is looking to add ice rescue equipment for the sake should it ever be needed again. The ice rescue portion will be based out of Corydon with Wayne County Farm Bureau matching funds to allow for the purchase of two suits, ropes and a rescue sled while they will seek out ways to acquire a flat bottom boat for rescues.

We can all hope it will stay tucked away never used, but is better to be safe than sorry and have the equipment ready. Afterall, happy endings make the best stories that can be shared.